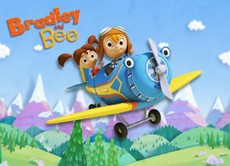 This Course Will Cover…

Market Awareness: Knowing and understanding the market, what content already exists, what the broadcasters are looking for and ensuring international potential.

Analysis of Successful shows: What made them a hit?

The Development Process: The key steps to follow for any new project.

Strength of Concept: Considering the uniqueness of the idea and the rules of the world. The elevator pitch test.

Character: How to create appealing characters that children can relate and aspire to.

Story & Comedy: Tips for generating original stories and showcasing the comedic potential of your idea.

Talent: Tips for developing a network of talent and bringing the right people on board.

Case Study: Got a project in development and would like to have it reviewed? Please share your ideas. One of these will be selected as a case study during the workshop to establish next steps for further development.

This workshop is aimed at anyone currently developing or interested in developing content professionally for children of all ages.

Leanne Preston – Leanne Preston is the Company Director and Founder of Bright Box Creative. She has eight years’ experience in the Children’s Media market, including working in development and production for six years at Nickelodeon in its international team. There, Preston developed and produced content for US and global audiences, including the BAFTA nominated and KCA award winning, ‘House of Anubis’. Preston also lead the development of Nickelodeon’s first global TV movie project and Nickelodeon’s Open Mic initiative, which produced several shorts from around the globe as well as working on a number of short form animated series for the network. Most recently, Preston was Head of Development for Red Kite Animation in Edinburgh, building a diverse development slate (which CBBC commended as the best they’d seen at Mipcom 2012), managing a team of 4 staff and representing the company at all major international markets such as MIPCOM, MIPTV and Kidscreen. Preston continues to work with Red Kite on a consultancy basis with several projects overseen having received pre-buy offers and/or greenlit for production including ‘Bradley & Bee’ which was one of the highest viewed clips at MIP Jr 2013 and has been picked up by Channel 5 in the UK. Additionally, Preston was responsible for the re-development of season 2 of ‘Ella Bella Bingo’, a Norwegian show for broadcaster NRK and oversaw the development of Dreamworks Classics’ properties: ‘George of the Jungle’, ‘Mr Magoo’ and ‘Underdog’ to work with high level US talent to bring them up to date for a contemporary audience. ‘George of the Jungle’ has since been commissioned by Teletoon in Canada. Preston has an excellent industry reputation and has a large network of creative contacts across the globe. She is regularly invited to and asked to speak at industry events such as Bologna Licensing & Trade Fair, Encounters Animation Festival, Seoul Character & Licensing Fair and The Children’s Media Conference. Bright Box Creative was set up in December 2012 and founded by Leanne Preston with a view to generating and exploiting its own new IP content and offering development executive services to other companies, helping to develop and champion ideas in the marketplace. Since then, Bright Box Creative has attended Kidscreen Summit in New York, The Children’s Media Conference in Sheffield and MIPCOM in Cannes, representing itself and key clients and is rapidly building a strong industry reputation for quality and unique content with cross platform and international audiences in mind. At Bright Box Creative, Preston largely focuses on the children’s media market and is currently developing and co-developing a number of original animated projects for preschool and 6-11 children as well as one original live action idea for adults and is in discussions with several potential partners.
In addition to developing its own IP, Preston has secured clients for Bright Box Creative in China,
Canada, Ireland, Germany, Spain and the UK, offering IP development, project assessment, brand
championing, co-production match-making and representing clients and their projects at markets. Most recently, she successfully engaged the head writer of Spongebob on a development project for a company in Ireland. In April 2013, Preston was invited to China to run a series of development workshops for Chinese broadcaster Toonmax Media of the Shanghai Media Group (China’s largest media conglomerate). The focus of the 4 day series of workshops was to help them to develop content with international potential, give an overview of the whole development process across preschool, comedy animation and live action and to critique and suggest improvements to the properties in development and under consideration to help with their MIPCOM preparation. Preston was since invited to produce the ‘Focus on China’ session at the Children’s Media Conference, with a view to helping UK companies better understand how to get their content into China and was also asked to run a seminar in London on the topic of creative content in China. Preston has been working with Toonmax Media’s in-house team to develop a new 6-11 comedy project set in Stone Age times called ‘Stone Bone Rocks’, which was announced just recently in C21 and a new preschool property called ‘Nunu & Lulu’. Both of these concepts originated in China and had their initial launch at MIPCOM 2013, generating significant interest and are currently being taken to pilot.

Non Members: 150 Euro, Members: 100 Euro. Companies and freelancers can become members of Animation Skillnet by sending a request to animationskillnet@gmail.com.

Payment can be made by credit card online (a link will be sent to you) or by cheque/postal order made payable to Animation Skillnet C/O Dublin Business Innovation Centre.