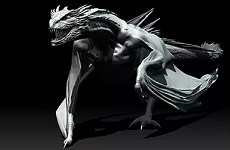 Creature Concept Sculpting 101 with Dan Katcher is a hands-on Z-Brush Workshop: Participants will sculpt their own creature portraits in the computer.

This half-day course will cover:

Participant Profile:
This course is aimed at professionals who want to further their understanding of making creatures in Z-Brush and who want to deepen their knowledge of anatomy to make more outstanding work.

Biography:
Dan Katcher is a renowned Los Angeles-based creature designer for television, games, and film. He is best known for his design of the dragons on HBO’s hit, Game of Thrones, which earned him Emmy recognition for three straight seasons. In addition to Game of Thrones, Dan is currently at work on creatures for a number of DC Comic productions, including The Flash, Legends of Tomorrow, and Supergirl. Dan’s previous work includes the dinosaurs on Fox’s Terra Nova, alien designs for the Green Lantern film, creature designs for MTV’s Shannara Chronicles, and sculpts of the Teenage Mutant Ninja Turtles for Sideshow Collectibles, as well as many other works both public and private. Dan got his start creating collectibles in wax for Todd McFarlane Toys in New York. Dan was trained in New York City at the School of Visual Arts, where he majored in Animation, and at the Art Students League, where he learned clay figurative sculpture from experts in the field. Dan later trained in both Maya and Z-Brush, and is considered a leader in his utilization of the latter platform. Dan credits his traditional art background for the depth of understanding of anatomy that sets his work apart. His ability to capture a character’s full range of human emotions gives his creations a signature, unmatched vitality.

Application Procedure:
Please apply by sending an email to: animationskillnet@gmail.com