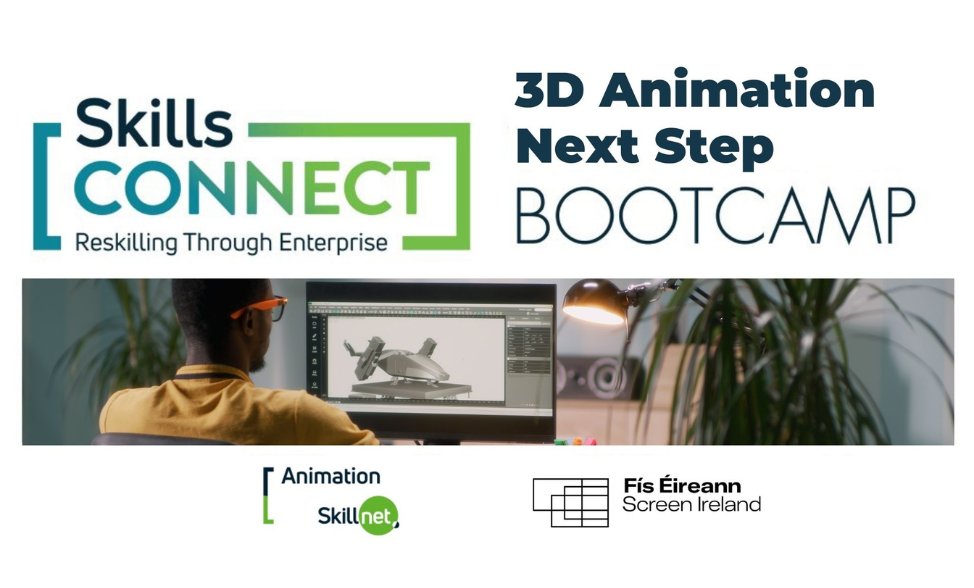 Animation Skillnet and Screen Ireland are proud to present the new instalment of their 3D Animation Bootcamp, aimed at recent graduates interested in joining the 3D Animation industry.

This Bootcamp is supported under the Skills Connect Programme.

Devised in consultation with professionals from various Irish Studios, the Bootcamp will involve an introduction to the stages of a modern 3D Animation Production. Operating a holistic approach, the key aim of this course is to expose the graduate artist to the key aspects of the working environment.

The aim at the end of the Bootcamp is for participants to be better prepared to obtain work with a studio.

This year’s Bootcamp will take place entirely online as follows:

Understanding Irish Tax and managing your accounts – 2pm to 4pm

First Steps into the Industry – 2pm to 3pm

Brian Gilmore –  Brian Gilmore is a 30+ year Animation veteran that has seen the industry transform from Analog to Digital in his career. Having started out in Murakami Wolf Dublin working on Teenage Mutant Ninja Turtles he has travelled the world working on big budget movies and TV series (Inc. Space Jam & Asterix). He spent most of his time in Ireland (20 years) working for Brown Bag Films in multiple roles, helping grow it from just a few guys to the studio it is today of 300+ in Dublin alone. Following that he spent 2.5 years building a feature film studio for Boulder Media/ Hasbro to produce the CG feature film My Little Pony – A New Generation released 2021. For the last 3 years Brian has worked with TU Dublin managing the CG apprenticeship as well as consulting with Screen Skills Ireland and other Industry training ventures.

Michael Downey – Michael is a seasoned recruiter with over nine years of recruiting experience, the last five of which were gained within the animation sector. He currently serves as Talent Management Director for Irish animation studio Lighthouse Studios, where he is responsible for sourcing talent from across the globe for the studio’s various high-end 2D productions. Prior to joining Lighthouse, Michael served as Lead Recruiter at Boulder Media and also managed his own successful animation consultancy, working with various studios to find and recruit much sought-after, high-level industry talent. His work includes several animated features and TV series in both 2D and 3D.

Peter Daly – Peter is a qualified Chartered Accountant with over 20 years of experience. He completed his training with PricewaterhouseCoopers and in the years since qualifying, has worked in various private and publicly quoted companies.

In 2015, Peter set up his own accountancy practice, Peter Daly, Chartered Accountants. The practice caters predominantly for individuals – many of whom are working within the Arts, but they also cater for small businesses, including Arts organisations.

Alongside his accountancy work, Peter also works as a writer and actor. He has worked with numerous theatre companies in Ireland including The Abbey, The Gate, Rough Magic, Druid and Fishamble among many others.

Pete Mc Nally – Pete is a Senior Designer at Microsoft and has worked in the Games and TV industries for 17 years, including stints as 3D Supervisor at twice Oscar nominated Brown Bag Films and Art Lead at Emmy Award winning Havok. He has also lectured in Game Art and his personal work has been featured on sites like 80Level and Sketchfab. Pete’s art can be seen at https://www.artstation.com/PeteMc and he blogs at www.petemcnally.com

System requirements needed for the Bootcamp

Workshops will be taking place using a virtual classroom app. Participants will need to have a good internet connection and a device with Audio, Webcam and Microphone for live chat sessions and feedback.

There is no fee for the Bootcamp but please note that there are only 12 places available.

Please note that applicants must have a current, valid address in the Republic of Ireland in order to be considered for this programme.

Graduates from Animation and other related courses who are interested in being considered for a place on the 3D Animation Bootcamps should apply at the link below by Monday 8th of August at 9am. Please apply here: https://forms.gle/csd4UCbAXqrJYC2dA

This section does not have any lessons.

This section does not have any lessons.