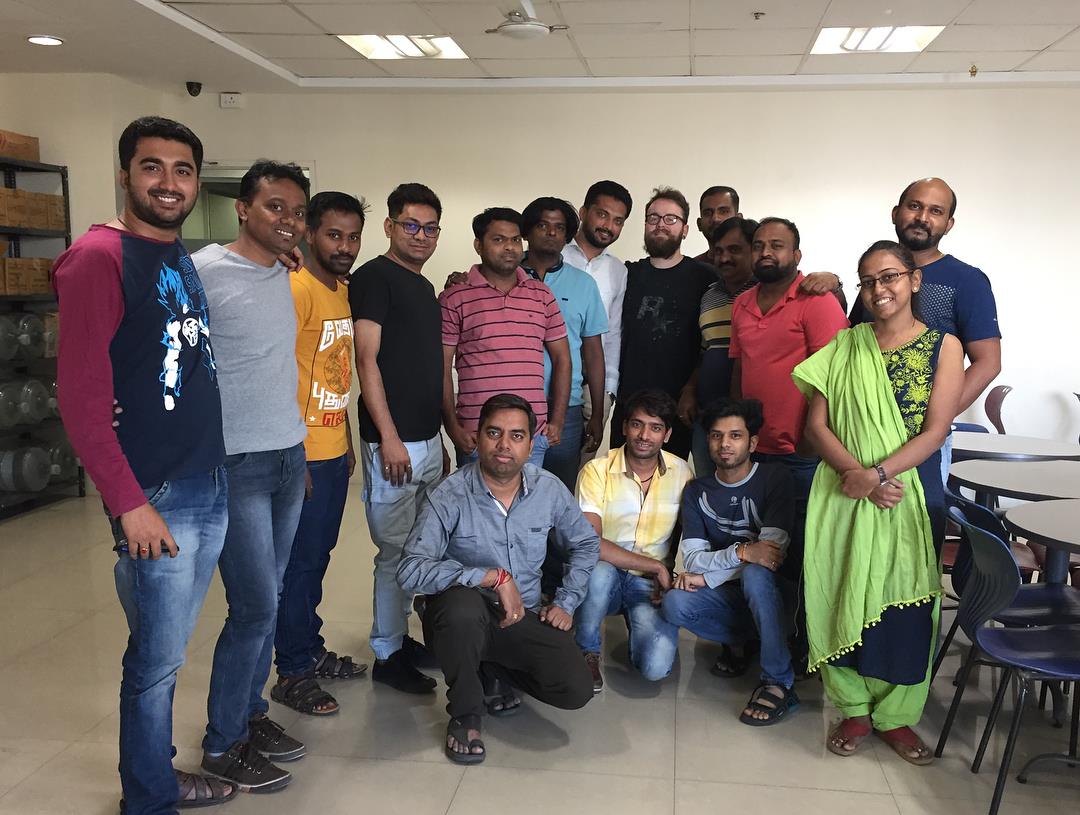 Today, we meet Animator and Rigging Department Manager at Boulder Media, Stephen O’Keeffe, who will be tutoring our April course: An Introduction to Toonboom Harmony – with a focus on rigging.

Hi Stephen, Can you tell us a bit about yourself and how you got into animation?

From an early age I was mad about cartoons, comic books and anything that inspired my imagination. Some of my earliest memories are watching Rugrats and the original Batman Animated series in the early 90’s. I used to sit and draw them from the television and I remember my grandmother made me some VHS tapes which I figured out I could pause and then trace the images on screen to make little flip books, at the time not understanding that I was animating. I remained passionate for creativity, and after a brief period of wanting to be an accountant for some stupid reason, I decided I was determined to study art. My parents were understandably hesitant in the beginning due to the limited career opportunities but I think once they’d seen how passionate about it I was and that it wasn’t just “a phase”, they supported me through college and continue to support me today which I will always be so grateful for. I studied fine art, but after understanding the difficulties of supporting myself as a fine artist (which I’m sure my folks would have had to bite their tongue on a big phat “I told you so” upon hearing), I decided to move to the animation course. Luckily I felt immediately at home there and have never regretted my decision.

When and why did you start work with Harmony? Did you get a specific training?

I was working for Magpie 6 Media from 2012 to 2013 on a production “The adventures of a young Marco Polo” in Anime Studio Pro. It was my first gig and at the time I was probably one of the youngest people in the industry. I still had no idea what I wanted to specialise in in the industry but I was just so hungry to learn as much as I could everyday. Our next production “Inis Spraoi” was to be made in Toon Boom Harmony and we received some general training from a now Toon Boom Legend, Stacey Eberschlag as well as plenty of training from the more experienced staff in Magpie 6. I was very lucky to be surrounded by a group of people willing to put time into a younger member of the team like myself. That kindness and belief has shaped the person I am today and is a large part of why I am so passionate about sharing knowledge with others. The image I’ve chosen to go along with the interview is heavily related to this. In April of last year I was lucky to be selected by Toon Boom to travel to Minte Studio’s in Pune, India. There I provided a week of introductory training to the staff. It was incredible to see people in a culture so different to ours here in Ireland, share the same passion for creativity and specifically animation that we do. As much as my Mammy will hate this, I hope I get to do a lot more travelling through work like this in the future.

Can you tell us about the main similarities and differences between other software and the version you will be using during the course?

I think it is its own beast really, but, if I had to label it for someone who’s never used it before I would say Toon Boom Harmony is sort of a hybrid of Autodesk Maya and Adobe Flash. Harmony is similar to Flash in that it is a 2D animation tool with primarily vector drawing tools and similar to Maya in that it has a node view and deformation tools. As artists, we’re visual people and the node view can be an easier way to understand complexity than layers stacked on a timeline. The deformers are also a very powerful tool that sees improvement in every new version of the software. Deformers are just more refined shape tweens and the “dad joke” I always make is that the deformers are like shape tweens… but they actually work (Sorry Adobe). The main thing when learning Toon Boom Harmony however, is you can’t really compare it with another software like Adobe Flash or TV paint. Yes there are similarities and techniques that can be translated; But you need to have a fresh perspective and, although they are solving similar problems, they are not designed to be used in the exact same way. When I’m teaching Harmony, whether it’s to a class for Animation Skillnet, a college or consulting; I try to understand how you would achieve a result in software you are more familiar in, and then show you how to achieve the same result in harmony. For example, the shape tweens in Adobe Flash have a similar purpose to reformers in Harmony, but they way they need to be set up to be used effectively are vastly different.

Have you had a chance to try Harmony 16? What are your thoughts on the new features?

I imagine this is complete gibberish to anyone who’s not used the software, so apologies in advance: Harmony 16 is great. In terms of rigging, not a lot has changed as there were already significant improvements going from Harmony 14 to 15 But the subtle improvements are what I get most excited by. There’s a lot of techniques we developed as a team in Boulder to work around some of the shortcomings in previous versions of the software that we no longer need. This improves our workflow vastly and frees up some headspace for the more complex problems riggers need to solve as well as making life for animators easier. As a rigging nerd; my favourite improvements are the addition of the “Easily Modify Deformers” function and the ability to strategically manipulate the cables in the node view so they don’t appear tangled like a pair of headphones that have been in your pocket for too long. The ability to create gifs easily is also amazing, especially as I am soon expecting the written word to be replaced by gifs and emojis.

Are there any changes or improvements you would like to see in future versions of the software?

The addition of the Master Controller in version 15 was a game changer for me. We have a pipeline team here in Boulder meaning we could utilise this feature, however not every studio is so lucky. I had been working with some colleagues in Boulder to develop something like this in the lead up to it being announced in Harmony 15 which also made this particularly exciting. This was not really possible without having a decent knowledge of some software development languages which at the time we were lucky to have in Boulder. In Harmony 16 they have added some some “pre-packaged Master Controller Setup Wizards”, this means the Master Controllers can now be utilised by a wider audience, which I think Toon Boom deserve a lot of credit for. So my hope is that they continue to improve the software and make it as accessible to as large audience as possible.

What was your favourite learning/up-skilling experience in the recent years?

I get asked this kind of question a lot in colleges when I provide training and my answer is always the same. 2D Harmony rigging has only really come to prominence during my relatively short career. I was lucky enough to get in early and when Boulder expanded a couple of years ago, I was tasked with building and structuring a department that didn’t exist before. I often get asked “What is your favourite project you’ve worked on?” and normally the answer is a specific show like “Wander Over Yonder” or “Danger Mouse”. But for me it’s been building a department from the ground up. 2D Harmony Rig Artist’s weren’t exactly common when we began the project so most of the team have only worked as a Rig Artist here in Boulder Media, coming in straight out of college or from a different department that had transferable skills like animation. While the team was in development, I too learnt and continue to learn so much both as a Leader and Rig Artist. I am so proud of the work I have done with my team and I am even more proud of how they have developed into one of, if not the best Harmony Rigging team’s Globally. I cannot speak highly enough of them both as a team and individuals.

Finally, is there an upcoming animation artist you would like us to discover?

Check out the Boulder Media Art Blog; this place is full of stupidly talented people that it would be hard to pick one! It’s one of the things I enjoy the most about working here, everyone is so talented but also for the most part humble. This creates an environment where everyone strives to improve and exceed expectations while helping each other to develop along the way. I’m not as naturally artistically talented as most of the studio, but I’ve never felt intimidated to create or share my art with anyone. I would even go as far as to say they’ve pushed me to create more.

An Introduction to Toonboom Harmony – with a focus on rigging